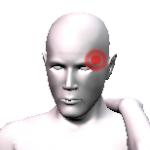 • Often associated with a predrome phase – mood change, loss of appetite, nausea
• Often accompanied with nausea and vomiting
• Pain is moderate to severe
• Often one sided throbbing/pulsating, but can be bilateral
• Can last several hours to several days
• Sensitive to light odors and sound
• May have a visual aura, but don’t have to.
• Want to hide in a dark room.

There are many triggers for migraine including emotional, physical, dietary, environmental and medicinal factors.

The exact mechanism of migraine is not fully known. It is understood to have a neurovascular component. Some kind of trigger initiates abnormal firing within the cerebral cortex of the brain known as cortical spreading depression.

This abnormal firing may lead to hyperactivity of the occipital/visual cortex of the brain resulting in visual aura disturbance. Other areas of the brain may also be activated such as the sensory cortex leading to signs of numbness or tingling.

The pain associated with migraine is thought to arise from stimulation of the trigeminal nerve and inflammation of the meninges resulting from the cortical spreading depression. It is also thought to be due to overactive nerve groups within the brain stem.

• Eliminating triggers
• Stress behavioural intervention
• Medications for acute: may include NSAIDS, triptans, asprin, paracetamol
• Medications for prevention: may include topiramate, propranolol gabapentin (NICE, 2012)
• Both manual therapy and acupuncture have been shown to provide pain relief and prevent migraine. From September 2012, NICE guidelines now recommend a course of acupuncture as a form of treatment for migraine prevention.

For more information about our other health services at the
Estuary Clinic, please visit our integrated health site.